It seems I can’t sleep at the moment. So what better time to write part II of my Japan blog entry. (Yeah, it seems the jet lag has been reversed :P). I’m sorry it took me so long to continue this, the last couple of weeks I’ve either had crazy jet lag and went to bed at 9, or been sick and not up to writing much because of that.

Sunday the 28th we went to Kyoto, a small town with a mere 1.5 million inhabitants. It’s about 450km away from Tokyo… or a little under 2.5 hours by train. Which brings me to the subjects of trains in Japan. They’re nuts about trains. Teknisk Ukeblad rated Japan as having the best train system in the world, and I believe it. In central Tokyo on some stations, trains were leaving every 2 minutes (no bloody kidding). And the funny thing is, they’re actually on time.  They had to be. And the ticket system are simply amazing, efficient, cheap, easy to use (even for foreigners, like us). Anyway, about the train for Kyoto. It was a so-called Shinkansen train – or bullet train. First off, we had probably twice as much room for our legs as we do with first class tickets in Norway (“Komfort”). Second of all, if they travel at 260 km/t, they’re going slow. We measured 285 with the GPS. It was amazing.

The personell is also worth mentioning. Every time anyone working at the train entered a train car, they bowed. When they exited, they bowed. When they sold you stuff (affordable stuff, as opposed to in Norway, where you pay triple the store price for a bottle of soda), they bow at least twice. Once to greet you, once to say thank you, and maybe once for good measure (or if they feel they disturbed you somehow). Train personell wasn’t exclusive on this part. People were generally extremely polite, bowing, very careful not to be of any trouble to anyone, clean and otherwise fantastic. I could mention one funny episode at a restaurant. I managed to drop one of my chop sticks. Before I managed to START bending down to get it, some lady stood there with a pair of new ones. She must have had super hearing… and some super speed. She gave me them and bowed and left. 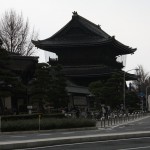 Not a lot exciting happend the first day, though, so skipping forward.  The next day we went to Hiroshima. We heard it was the bomb, and surely, we did have a blast. Anyway, again we stepped on the Shinkansen train, this time from Kyoto. After a SWISH and finally a SWOOOSH we arrived at Hiroshima. They who think Hiroshima is a pile of rubble might be enlightened, there’s really no sign of nuclear annihilation anywhere 😛 A few pictures included below. 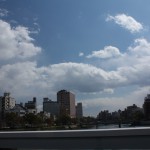 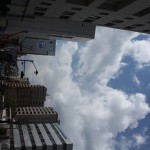 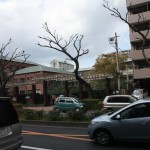 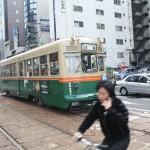 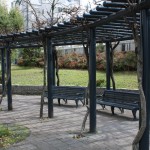 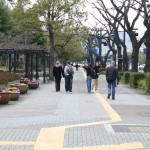 At this point, I got tired of inserting pictures in between the text. It takes so much time, since I have to do it one picture at a time. Blblbl. I’ll just include a gallery of all pictures at the end (WordPress has a gallery function, but unfortunately there can be only one gallery per post). Just so you’re aware, in case you wonder there are no pictures.

Once there we visited Hiroshima Castle, a castle in the middle of town. Being only about 700 m away from ground zero, it was destroyed in the nuclear blast, but it has been rebuilt. It had a really beautiful garden and it was surrounded by water. Before we entered the garden we saw a really scrawny looking tree, having some kind of crutches for support. This tree was actually one of the few surviving ones from the bomb. The sign read “A-bombed tree” – quite cool.

Moving on, our trip went on to the memorial park, built in the area where the bomb hit. The first thing we got to is the building known as the atomic bomb dome. It’s a building that was located RIGHT below where the bomb exploded (it detonated some hundred meters up in the air). Surprisingly,  the building was still standing. They say it’s BECAUSE it was located right below, and it do make sense. The rest of the park was also very nice, I’ve included some pictures.

We finished our stay in Hiroshima with some dinner. Again japanese politeness showed when we were leaving. The owner / server / whatever actually followed us out, then took a deeeeeep bow several times in the stairs while saying something like “thank you very much” (I think). Quite nice, I could get used to it. 😛

The next day we decided we wanted to see Nara. It’s a place just south of Kyoto. Jumping on the not-so-very-quick-express-train (it was down to Norwegian local train standards – but hey – it was a short trip) it took about 50 minutes before we arrived. It’s a beautiful city a little smaller than Oslo, with a HUGE park famous for a huge amount of tame deers. That’s the place we were going.

It was not a joke. The park was FULL of deers. They were everywhere. And they sure were tame – they came eating from your hand, if you had anything to offer. I have a LOT of deer pictures, I won’t put them all here since they’re pretty much the same. But you get the idea from the ones I uploaded. Anyway, it was amazing seeing deers this tame. In Norway you rarely see one, and if you do see one they run away if they see you coming closer than 100 meters or so. Also the park was really HUGE. And it was so beautiful, and quite a contrast to the rest we had seen of Japan, with skyscrapers everywhere and blinking neon lights.

Deers were not the only tame animals  in that park. There was a pond there. It was filled with huge all-sort-of-colored fish. When I say filled I say you wouldn’t believe how much fish there was. What’s funny is that if you put your finger into the pond, they would try sucking it. It was incredibly funny. And weird.

The next day we decided to stay in Kyoto, since we really hadn’t seen the city we actually lived in. We wandered around a bit in town, saw a few gardens, and a few temples. It’s really a beautiful city, I’ll let the pictures speak for itself. (PS: The pictures should appear in approximately the order I’m writing about them).

The next destination on our trip was Okinawa, the main island in the Okinawa prefecture, south of the Japanese mainland. It’s far enough south to have a considerably warmer climate, with palm trees and coconuts. We stayed in the main hub in Okinawa, the city of Naha. Okinawa is not typical japanese… It’s quite different in many ways. Okinawa wasn’t always japanese either, and after WWII, the US have had a huge military influence in Okinawa. Despite of this, people still are crappy english speakers. 😛

The day we arrived was warm. Hot summer temperatures in Norway-warm, and sun. Unfortunately the sun disappeared the first day, and never came back (and it didn’t tell us where it was going!). The first day we wandered around a bit, seeing the city. It’s a nice city, although not quite as nice as Kyoto or Nara, and not as amazingly huge as Tokyo. Still, a nice city it is.

The next day we decided to take a bus north to see the country. It was a long, long ride, but we eventually got off. We were met by a pretty nice beach, a few houses and some hotels. Not much to say about it really, but we had a good time when we were there. The best experience we got the next day. There are more islands in the Okinawa prefecture. We went to one of the islands in the Kerama island group. We went by ferry, an extremely wobbly ferry (made me quite sick, literally :P). We got to the island, had some lunch and decided to take a walk. We followed a small road into the “mountains” of the island, and got quite a few nice sights. Far uphill, there was a couple of observation posts, giving us a sweet view of the whole harbor area and some of the surrounding islands. We had tons of fun messing around up there, and got a whole lot of good pictures, so it was definitly worth it.

And… that’s pretty much it. That was our trip. The pictures are included below in the gallery, along with a few unrelated ones. Notice the picture with the map showing the location of the “World Bag and Luggage Museum”!