Some may have picked up that I’ve joined Tenshi Tsume, a martial arts group at NTNUI that is a mix of various martial arts (mainly Jiu Jitsu though). On Saturday I got my yellow belt. The grading was tough as hell, I’ve never seen anything like it. I won’t go into details here on this site in case future members reads it (it’s a little secret so people don’t know what to expect), but believe me when I say I’ve never been as exhausted as when I was done. But I got through it, and passed with good margin. 😀 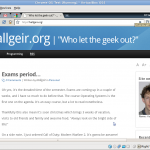 I’m really looking forward to when it’s done – maybe even I will buy a netbook then. 😛 Though I see that some of the features they were very proud of (like the application tabs) will come in Firefox 4.0.