itDagen at NTNU was for me a great success. Let me explain what itDagen is.

As most of my friends should know I’m going to Japan for a couple of weeks. That of course costs money, so what the 3rd year of computer science (that’s where I’m at) and communication technology is that we invite maybe 50-60 companies to our school so that they may do some recruitment, in exchange for a sum of money. They love it of course, since they’re able to recruit some very talented people, and we love it because we get in total around 1.2-1.3 million NOK to spend on our class trip to Japan (for computer science) and… somewhere else (I think Singapore and Malaysia for communication technology).

Anyway, in addition to talking to a whole lot of very interesting companies, many of them had quizes which we could answer to win… stuff. Usually expensive stuff (PS3, smartphones, XBoxes, …). I did one of those C++ quizes. And I won the geeky dream phone of all time: 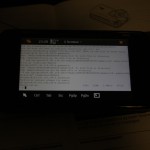 Nokia N900. Full keyboard, high performance mini-computer. People call it a phone. I’m not sure I agree; it’s more of a computer with a built-in phone. Anyway, to my delight I found out it ran Linux (you can see a linux terminal on that picture, where I transfer Duke Nukem 3D over SSH to run on DosBOX from my desktop computer (though I haven’t gotten it to run yet – but I will 🙂 )). It running linux is a great thing, since there are quite a lot of good open source software out there which can easily be compiled for the ARM archtecture used on this phone. And people have found that out, so already there are lots of good stuff for geeks like me.

That being said, the battery time isn’t all that good (not really unexpected :P), but I can live with it. Also, the phone being so new (released in November or December of 2009) the choice of software for the phone is still lacking a bit (but that I expect to turn around very quickly). In any case, I’m particulary excited since I didn’t pay anything for it – I actually won it. I’ve never won anything this expensive! (around 5000 NOK, about $850). I must admit I’d never pay that much for a phone, no matter how great it is. I think that goes for many people. 🙂